The Grammy Awards have a reputation for attracting bolder, riskier and more eye-popping fashion than almost any other major award ceremony — and the stars didn’t disappoint as they arrived on the red carpet Sunday evening.

Held in Las Vegas for the very first time, the event’s 64th edition was initially slated for January but was postponed due to Covid-19. But the pandemic felt like a distant memory as mask-less celebrities showed up sporting elaborate outfits, fun accessories and freshly dyed hairdos.

Although some of the night’s biggest names opted for black — from Dua Lipa in a sheer Versace bondage dress dripping with gold to Billie Eilish in a voluminous Rick Owens layered skirt — it was pink that reigned large at the MGM Grand Garden Arena.

The evening’s men also got in on the trend, with Travis Barker wearring a silky pink robe, Trevor Noah sporting a pastel-colored tuxedo jacket and red-carpet fixture Billy Porter wowing in a spectacular florescent creation from Valentino’s Fall-Winter 2022 womenswear collection.

Elsewhere, BTS members looked suave in a complementary array of colorful custom Louis Vuitton suits. Justin Bieber took a more relaxed approach, with an oversized suit accessorized with one of his signature beanies (this one also embraced the hot pink trend).

Numerous stars looked to show-stopping detailing, sequins and embroidering to make a statement, with Jasmine Sanders and Lil Nas X both opting for butterfly embellishments in, respectively, a long-sleeved gown and theatrical Balmain suit.
Others, meanwhile, had fun with accessories — see Halsey’s sculptural hat, Doja Cat’s candy-filled glass bag and Olivia Rodrigo’s choker, one of several Y2K throwbacks on display. There was plenty of playful nail art and colorful hair, too, from Japanese Breakfast front woman Michelle Zauner’s bright yellow fingertips, which were intricately painted to match her Valentino gown, to J Balvin’s blue trim.

And it wouldn’t be the Grammy’s without some more outlandish choices. H.E.R. divided social media with a custom yellow-and-orange kaftan jumpsuit by Dundas, while British singer Yola, who was nominated for best Americana Album, needed help from several other attendees to unfurl the full splendor of her head-to-toe purple outfit.

The oddest outfit of the night, however, came from singer and songwriter Tayla Parx who arrived in a costumey spiked jumpsuit that saw her compared to Nintendo character Bowser.

Scroll down to see some of the standout looks on the red carpet. This story will be updated as the night unfolds.

Chrissy Teigen was one of many pink looks of the night in her voluminous fan dress, while John Legend wore a velvet black suit by Zegna. Credit: Frazer Harrison/Getty Images for The Recording Academy

Ferrer points at the back of J Balvin’s head. Credit: Angela Weiss/AFP/Getty Images

Billy Porter (left) joined the posse of hot-pink looks of the night with a Valentino ensemble that featured a flowing cape, while Fivio Foreign (right) opted for an all-white look with pearls embellishing his jacket and cowboy hat. Credit: Johnny Nunez/Getty Images for The Recording

Tinashe wore a pink latex-looking dress with a large bow at the back. Credit: Jordan Strauss/Invision/AP

With many stars opting for hot pink, Trevor Noah went for a more of a pastel hue with his suave double-breasted jacket. Credit: Jordan Strauss/Invision/AP

Dancehall artist Spice arrived with a voluminous red robe that she let drop to the ground while posing for photographers. Credit: Angela Weiss/AFP/Getty Images

Questlove kept things casual in a dark patterned jacket and a pair of Crocs. Credit: Johnny Nunez/Getty Images for The Recording Academy 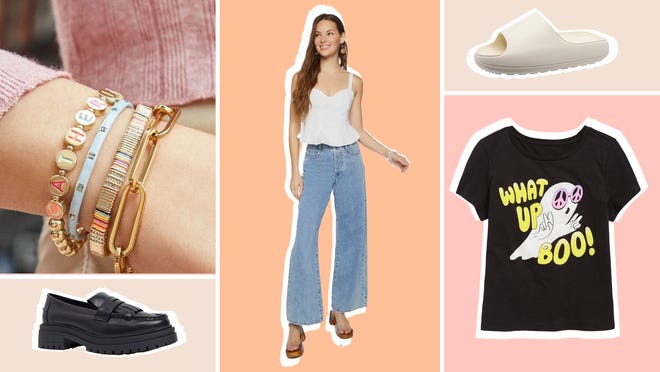